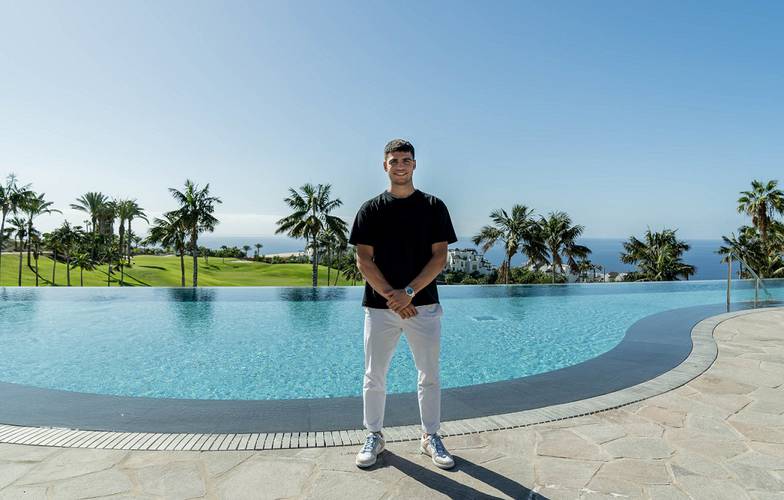 The tennis player visited the facilities at Abama Tennis, which will host three new ATP tournaments in 2023, establishing the island as a new major international name on the sport’s professional tour

The number one ranked tennis player in the world, Carlos Alcaraz, visited Abama Tennis yesterday. The facility is located at Abama Resort in southern Tenerife, where he is spending a few days of rest and recovery following the 2022 tennis season.

The Murcia tennis player explored the sports complex, which will host three tournaments on the ATP Challenger professional tour in early 2023: one ATP 100, scheduled for 16th–22nd January, and two ATP 75s, taking place between 30th January and 12th February.

Alcaraz – who ended the season holding the record as the youngest number one player since the ATP list was computerized in 1973 (at 19 years and 214 days) – was unable to compete in the last tournament of the year, the ATP Finals, due to an injury.

Yesterday, the tennis player spoke to the media in Plaza Abama. He began by extending his thanks to the entire team at Abama Resort Tenerife and Las Terrazas de Abama Suites hotel, managed by My Way Meaningful Hotels, where he has been staying. He remarked that given his hectic schedule, in winter it is a privilege to ‘have a place like this, here in Tenerife, so close to home, to get away, have a good time and enjoy the excellent spaces, good weather and cuisine’.

‘It has been a pleasure to be here and enjoy the Abama Resort Tenerife experience. I've had the opportunity to stay at Las Terrazas de Abama Suites with friends, where we've been having a blast since we arrived. Thanks to this time away from it all and having fun, I’m going to be able to start the season in top form and train for the Australian Open 2023,’ indicated the tennis player, who promised to return for a holiday on the island next year.

Accompanying Alcaraz at the press event was Brendan Breen, director of Abama Tennis and Abama Golf; Pedro Martín, chair of the Tenerife Council; and Josefa Mesa, mayor of Guía de Isora, home to the tourist resort chosen by the top player as his holiday destination. Alcaraz stressed that he does not feel the pressure of having topped the ATP rankings at such a young age.

Pedro Martín thanked Brendan Breen and the property for their efforts in continuing to promote tennis and golf at Abama Resort, ‘creating supporters and adding to the identity and image of the island of Tenerife’. Martín emphasized: ‘One thing that we at the Tenerife Council have tried to promote, especially in recent years, is being able to bring leading tournaments to the island.’

In his opinion, ‘There is still much to exploit in the world of tennis. I think this destination, which enjoys fine weather year-round, will build the fan base, and I recognize the efforts of the Tenerife Island Tennis Federation in this area,’ he added.

For her part, Guía de Isora Mayor Josefa Mesa stated, ‘As a municipality, we are delighted to have the world’s number one player here,’ thanking the tennis player for choosing the destination.

‘Guía de Isora has always stood out for its commitment to high-quality tourism, specializing in the 5-star and Grande De Luxe segment, and I believe these facilities are proof of this,’ in reference to the tennis and golf sports facilities at Abama Resort Tenerife. ‘We must maintain this commitment, and Tenerife needs to offer more than just sun, making all the sports spaces in our municipality and on the entire island profitable as well,’ she added.

Plaza Abama – the destination’s new shopping and leisure area, which hosted the event with over 20 journalists – is now the location of the reception desk for the hotel at Los Jardines de Abama Suites, the second Abama Hotel at the destination, and it boasts a large swimming pool. It will shortly also have restaurants, cafés, shops, a gym and a wellness centre with spa.

The new Plaza Abama is just next to Abama Tennis, which, as Breen noted in his remarks, ‘is now the best tennis complex in the Canary Islands, and we want it to be a major global name’. With seven fast courts, four paddle tennis courts, a rest area for players, and stands with capacity for 600 spectators on the centre court, among other services, Abama Tennis is set up to host major tournaments in the future.

The two sport complexes at Abama Resort Tenerife are among the finest in Spain. As the Abama Tennis director explains, ‘The property is continuing to roll out facilities with the aim of establishing it as a major international name,’ enabling professional tennis players to come for outdoor high-performance training 12 months a year, thanks to the exceptional climate on the island of Tenerife.