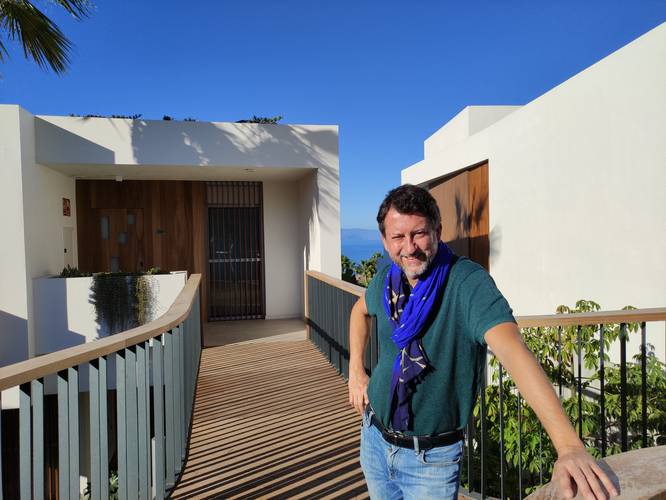 The landscaping carried out by Juan Lima, from Coderch Urbanismo y Arquitectura, provides continuity to the concept designed by the multiple award-winning Melvin Villarroel with “architecture of emptiness” and persists on the path of sustainability by including photovoltaic energy systems

Nearly 20 years ago, the multiple award-winning architect and landscaper created the master plan on what had previously been a Canary Island banana plantation, for the grand tourist complex now forming Abama Resort Tenerife, applying his distinctive concept of “architecture of emptiness”, in which solid constructions occupy a small part of the land to allow the rest to act as a transition between these and the exterior, providing continuity to nature and the surrounding landscape within the actual architectural design, creating an integrated, harmonious complex, in which nature, sustainability and comfort gather in the context of history and tradition.

This is the case to the extent that even the name of this now famous tourism destination in southern Tenerife draws on the actual history of the place where it stands, being called after the original estate.

The master plan by Villarroel was embodied in what is known as the Country Club Partial Plan, drafted by GIUR Studio, that has continued to be developed and executed to the present day through the studio Coderch Urbanismo y Arquitectura, after development of the General Organisation Plan for Guía de Isora, headed by the architect and landscape designer Juan Lima, who has promoted an idyllic environment not only for the guests, but also for the municipality and the island in general, in the most recent tourist complexes developed in Abama, projects with green areas that triple the minimum amounts required by the island tourism regulations.

Lima, who is from Tenerife and has nearly 25 years of experience as an architect and landscape designer, knew how to perfectly understand the concept laid out by Melvin Villarroel, and he put this into practice not only in the architectural projects of Las Terrazas de Abama Suites and Los Jardines de Abama Suites, but also in the landscape complex that covers both complexes, merging vivid nature and flowing landscaping among the palm growths, with more than 300 species of autochthonous species, overhanging shade and rock paths that provide a reminder of natural history in the area, extending the complex to the sea down a 400-metre slope, that drops like basalt terraces in the island tradition, to a beautiful, semi-private beach with fine sand that overlooks the Atlantic, with the eternal lighthouse of La Gomera on the horizon.

The Ritz Carlton gardens in Abama, also designed by the renowned Villarroel; the more than 60 hectares of Abama Golf, by the equally notable architect and landscape designer Dave Thomas, and all the complex covered by Abama Resort Tenerife, have more than 25,000 Canary palm trees and more than 16.5 hectares assigned exclusively to garden areas. The exuberance of the green landscape makes the whole tourist complex the largest area of natural vegetation in the whole of southern Tenerife.

In addition to all this, there is the global photovoltaic energy project that Lima and the rest of the team from Coderch Urbanismo y Arquitectura, along with IHD Ingenieros, are developing in order to increase the energy efficiency and environmental sustainability of the resort.

Inclusion of solar panels integrated in the landscape and architectural complex, to take advantage of the sun in southern Tenerife and reduce consumption of energy from polluting sources is an approach that, along with the ISO 14001 and EMAS certifications to back the work by Abama Golf in sustainable water use, come together in a complex that not only has a present overflowing with plant life, but that also looks forward to an even greener future, aiming to become an island and national reference in environmental sustainability and nature in the tourist sector.